‘If at first you don’t succeed, try, try and try again’

What can we learn from how babies learn? Persistence, the willingness to fail and practice, practice, practice. Babies don’t give up on learning how to walk: ‘when a child is learning to walk and falls down 50 times, they never think to themselves “maybe this isn’t for me”’. As adults though, do we give up on learning new things too quickly – or even at all? Two things have caused me to reflect on this recently. First, having my own young baby to watch in action. I’ve been mesmerised by the developmental phases she and her baby peers are going through. Second, having watched Angela Lee Duckworth’s TED talk on ‘Grit: The power of passion and perseverance’. Duckworth’s argument that we succeed through hard work and perseverance has lodged in my mind, flying as it does in the face of the much-publicised, so-called millennial expectations of instant gratification and their sense of unconditional entitlement. See for example probably the most famous viewpoint on this, Simon Sinek on Millennials in the Workplace.

Learning by doing, and by falling over

Seeing my infant daughter’s efforts to crawl has really got me thinking about whether we could all do with a bit more grit in our lives. Initially, she was desperate to be mobile, yet not able to coordinate the fairly complex crawling action. So first, she approached her target – an out-of-reach toy, for example, or my iPhone – in a kind of commando shuffle, inching along by wriggling and pulling with her arms as she lay flat on the floor on her tummy. Soon she could get herself into a crawling stance, but was unstable and unsure of how to move on from there. The frustration I witnessed was intense. Ellie’s face would crumple and she would collapse into a screaming, bawling heap. Yet seconds later, she’d be back on her hands and knees, trying again. After several attempts, she would usually need picking up and cuddling to calm her. But then she’d be ready to try again, starting anew with intense focus. Persistence and practice pays, as now she is an accomplished crawler who can scoot along at surprising speeds. Her unedited joy at her own achievement is delicious to see. Now she’s moving on to hauling herself upright as a precursor to walking …

We don’t doubt a baby’s innate ability to learn to sit up, to crawl, to walk and talk. We expect our children to learn and we proudly watch them do it, supporting their every effort. They learn through keen observation of role models, copying, through trial and error, through instinct and through constant practice. But we don’t always have the same expectations of ourselves or other adults. How often have you given up on something new after the first, failed attempt? Still worse, how often have you not even tried out a new skill or project because of the fear you might not be able to do it, you might fail? Yes, you might. But if you don’t try you’ll never know. You’ll certainly never learn. And without learning you risk becoming stuck for ever with the same old skills, competences, views and mindsets. Not necessarily such a great choice in a world that’s constantly changing around us.

Unless you have an incredible natural talent for something, most new learning takes practice. That demands being open to the possibility of failure, or of doing something less well than you might ideally like to. Practice also requires the determination and motivation – the sheer grit, to use Duckworth’s term – to keep going, to repeat something that you can’t yet do well, in the belief that by doing it you will get better. Whatever it is we want to learn, we need to accept that we’ll have to go through the equivalent of a baby falling over and then picking themselves back up to try to walk again.

I’m reminded here of the notion, popularised by Malcolm Gladwell, of the magic number of 10,000 hours to become great at anything, even if you have a good dollop of natural skill to start with. Whether you see it as encouraging or dispiriting, most geniuses and people with an innate gift for something have put in the hours to hone and develop their craft, to become the expert who performs and delivers a consistent level of excellence, seemingly with no effort at all. This can be a bitter pill to swallow, especially for successful professionals who are highly skilled in what they already do. Perhaps too for those archetypically impatient millennials. Becoming a novice again and flailing around outside our comfort zone can be very unsettling and frustrating. Putting in the time and effort to practice can feel burdensome. Just as a baby has an encouraging parent on standby, we might want to have our own support team in place for when things get tough. This could be a teacher or mentor, a trusted colleague, a coach, or just a helpful friend or family member. Whatever you need to help you keep picking yourself back up again.

To keep up-to-date in our chosen field, or, even more challenging, to learn a brand new skill, whether for our career, our personal development or just for fun, we have to be prepared to live through the growing pains. Because what’s the alternative? Going back to the quote at the start of this post, the alternative is deciding that ‘maybe this isn’t for me’ and just not doing it. How many babies do you know who decide not to bother walking because they’re afraid to try? Not mine, that’s for sure! 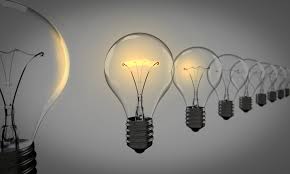 What are the best apps for busy businesspeople?